Extraco, S.A. completed this week the renovation works, which were carried out during the last few months, of the classrooms of the Military Naval Academy of Marin, where the new research center will be located.

The handover ceremony was attended by Colonel David Jañez of the Corps of Engineers, member of the Office of the Deputy Director General of Projects and Works of the Ministry of Defense, who officially handed over the new premises to the commander director of the Naval Academy, José María Núñez Torrente.

The works consisted of the remodeling and expansion of one of the buildings that was already part of the center: 600 square meters distributed over seven research laboratories: radar, mechanics, measurements, fluids, chemistry, simulation, etc.

By opening these new premises, the Academy is able to offer a wider range of training programs and expand the bachelor’s degree in Mechanical Engineering taught at the center (affiliated to Universidade de Vigo). 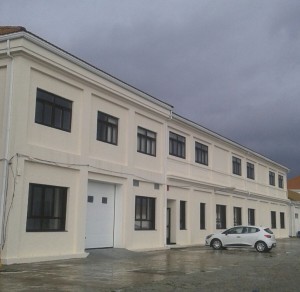