Infraestruturas de Portugal, an organization dependent on the Ministério de Obras Públicas, Transportes e Comunicações (Ministry of Public Works, Transport and Communications) has commissioned Extraco with an important contract for the structural restoration of three large bridges. This construction works imply the repair of three viaducts in the highway EN-234, two of them over river Criz (Criz I-Ribeira de Breda and Criz II-Ribeira de Criz), crossing Santa Comba Dão, in Viseu district; and another one, São João das Areias bridge, located over river Mondengo, in Tábua municipality, in the district of Coimbra.

Criz I and II bridges, 180 and 300 meters long, respectively, were designed by Portuguese engineer Egdar Cardoso an built between 1976 and 1979 with prestressed concrete and slabs on their deck. São João das Areias bridge, designed by the same engineer at the same time, crosses the Aguieira dam and is 260 meter long; its structure is similar to the previous ones. These three viaducts had problems with extensive reactions due to the alkali in the concrete of several columns, so their repair was advised in order to avoid any risks.

The restoration being carried out by Extraco is progressing well and it includes highly technical actions, such as the substitution of the foundations in some columns located in the river and in the dam. For this purpose, large diameter pilings with metal liners are being used.

These works will be completed within the forthcoming months by replacing the support elements of the decks, reinforcing shafts and occasionally repairing structural pathologies and the durability of pillars and capitals, besides employing concrete protection elements. The company’s forecast is that every action in these bridges will be completely finished by the end of 2017. 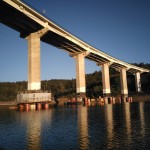 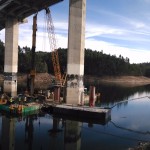 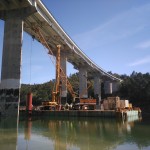 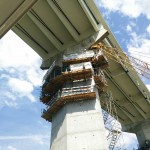 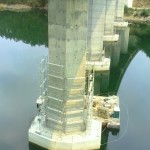