The Spanish Innovation Certification Agency (ACIE), accredited by ENAC (Spanish National Accreditation Agency), has recently backed up the Sitegi project, developed by Extraco since 2011 in collaboration with several Galician companies and with the University of Vigo. The certification process for the year 2012 has been finished, according to the UNE 166.001 standard (R&D projects) and Spanish Royal Decree 1432/2003.

The Sitegi project, Application of Techniques for Infrastructure Inspection and Management , aims at improving road safety and reducing the maintenance expenses of road infrastructures. For this purpose, researchers have designed software and technology for road inspection and they have integrated them, together with other modern measurement systems, in a vehicle similar to the one used by Google for its ‘street view’ tool. The car collects all types of data using various sensors, such as scanner laser, infrared thermography, photogrammetry or geo-radar, among others. The collected data are transferred to a geo-referenced database at a central computer, where all the systems are synchronised to diagnose the actual situation of each infrastructure.

This project has a budget of 3.4 million Euros and was co-financed by the European Regional Development Fund (ERDF), within the 2007-2014 Technological Fund Operative Program and by the Centre for Development of Industrial Technology (CDTI).

Over the last few months, this research has obtained relevant awards, such as the prize given by the Spanish Road Technology Platform in the Annual Road Infrastructure Innovation Prizes in the category of Best R&D&I Project. 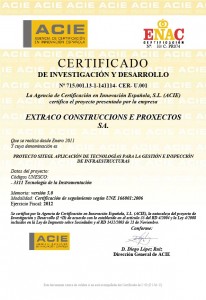