Opening of the new building built by EXTRACO for the “Contraloría General” in Las Tablas, Republic of Panama

The new building for the regional office of the “Contraloría General de la República” (the Auditors’ Court of Panama) has been opened in September in the district of Las Tablas, province of Bocas de los Santos, in Panama. This two-story building with a glazed façade divided in three parts has elevators and adapted accesses for disabled people, as well as its own parking area. In addition to the new building, EXTRACO has developed its surroundings, building pedestrian accesses, green areas, traffic infrastructures, perimeter closure of facilities and the control access and security sentry box. This project has been supervised by the Technical Board of Engineering and Architecture.

The “Contraloría General de la República” is a supreme audit institution that controls whether the administrative expenditures of the state are correct and whether they are within the existing legal framework.

The official opening ceremony of the facilities was attended by the President of the institution, Gerardo Felipe Solís Díaz, as the representative of the contracting entity. 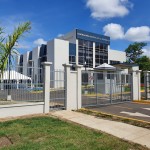 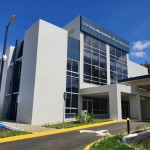 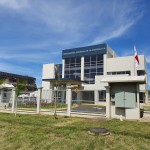