Renfe Viajeros has just awarded Extraco S.A. the full renovation of the Ramón y Cajal train station in Madrid, a very complex project with an estimated term for completion of 16 months which comes under the framework of the 2018-2025 Comprehensive Plan for the Improvement of the Suburban Rail System of Madrid, presented last April by the minister of Public Works and Transport, Íñigo de la Serna.

The station currently consists of a building, two railway tracks and two platforms connected by an underpass with a fixed stairway, and is located in a sharp banked curve, which makes it difficult for the train to go up and down.

As part of the awarded works, two elevators will be installed in the existing underpass, the access ramp to the main building will be refurbished and the platforms will be adapted to the current regulations. This will involve the construction of a platform which is to be located in a straight line in order to avoid an excessive gap between the platform and the train. In addition, new routes will be added to make it easier for the visually impaired to move around the station.

The full renovation of the station also includes refurbishing the station building, as well as improving the electrical installation, installing new train sheds, adjusting the fencing system and providing it with efficient lighting. 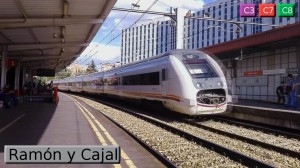