Extraco is undertaking the refurbishment works in the old headquarters of A Coruña’s Health Department in order to turn the building into the new Espazo Público Amizar. The remodeling, promoted by the Xunta de Galicia through the Axencia Galega de Infraestruturas, was awarded to the temporary joint venture of Extraco and Servicios Gómez Crespo SL, with an implementation time frame of 12 months.
The complete refurbishment of this administrative building of the Xunta de Galicia, located at Calle de Gregorio Hernández, will be divided into two stages. The first stage includes demolishing the internal partitions and façades, as well as removing woodwork, installations and furniture, in order to leave all structures empty. After that, the building will be reconstructed on the same structure for its later administrative and social use.
This building will house the employment office, the central offices of non-profit social and health institutions and the administrative offices of the regional administration. It will also have an auditorium for the users of Espazo Amizar.
At the same time, complementary works will be carried out for seven months in the future headquarters of 061, located in the southern part of the plot. These works will prepare the building, which was previously used as an advanced life support ambulance station work room and a conference room.
The complex that will become Espazo Amizar has a main building with two phases located inside the plot: one is a five-floor prism with a rectangular base, whereas the other has four floors and an oval base. Both phases are connected by a passageway on all floors. In the southern part of the plot, there is a smaller building with two floors (one is used for filing records and the other one is not being used) where the new headquarters of 061 will be located.
The works planned will include modifying the circulation core and access areas, as well as the courtyard, improving access to natural light and visual permeability, and making improvements to the façade, thus creating a renewed image for the complex. Improvements in energy efficiency will also be implemented. 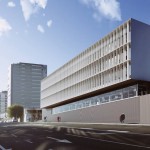 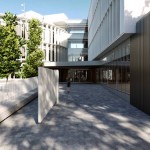 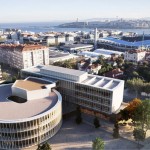